Middle East & North Africa OTT TV episodes and movies will generate revenues of $1.75 billion by 2022; more than quadruple the $428 million recorded in 2016.According to the Middle East and North Africa OTT TV & Video Forecasts report, SVOD’s dominance of the sector will grow. SVOD revenues will reach $1.23 billion by 2022 (or 70% of the OTT total); nearly $1 billion more than the 2016 total (56% of OTT revenues). 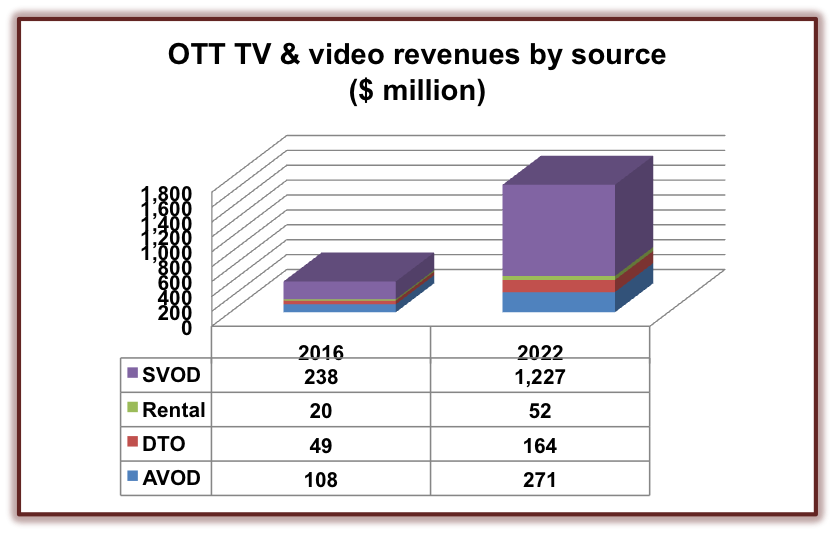 Digital TV research predicts that there will be 17.27 million households using SVOD by 2022, higher than the 347 million at the end of 2016.  Turkey will remain the leader by some distance, having established a major local player as far back as 2011.

Netflix will be the largest pan-regional SVOD platform by 2022, with an expected 3.26 million paying subscribers. This is more than quintuple the 2016 total. Longer-established Icflix will cross 2 million subscribers by 2022 – quadruple its 2016 total. Starz Play will add a further 1.60 million. Our forecasts of 695,000 subs for Iflix by 2022 only cover six of its eight current countries in the region.

Simon Murray, a Principal Analyst at Digital TV Research, said: “A handful of mobile operators such as Orange, Zain, Ooredoo, Etisalat and Vodafone have assets across several countries. SVOD platforms can gain considerable economies of scale by signing distribution deals with mobile operators. Deals between mobile operators and SVOD platforms are already prevalent in the Middle East and North Africa – offering an example for the rest of the world to follow.”